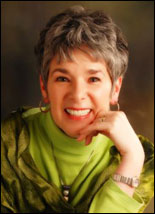 As you can see, I clearly come from a long line of stylish folk. They don't call M'ma the Queen of Accessories for nothing. This is a woman who's never been afraid to dance right out there on the edge, but it works for her, y'know? Daddy, of course, had that trademark gleam in his eye working for him- it was the only accessory he ever needed.

"Well, sure," say those of you who've seen me on my less than fashionable days, "her parents have pizzaz. What does that prove?" Hey, I come from a family simply crawling with style. If my parents aren't enough to convince you, then how about my cousin Colleen, who's the closest thing I've got to a sister? Colleen knows makeup. In fact, as you may recall from my old webpage, I strongly suspected she was born with a lipstick in each hand. I was pretty sure it was Clinique Earth Red base, with a Golden Brandy topcoat. But not long after I posted that I got an email from her. "SusieQ, please," it said. "Get with the program. I switched to Estee Lauder ages ago." 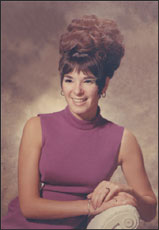 Hmm. Perhaps that's not the best example I could've come up with. And this photo in my big hair phase should probably be kept under wraps, considering I actually thought it was a good look for me.

Okay, maybe the style gene skipped right over me. But I have a really good excuse for my occasional lapse in fashion judgement. I grew up in a household with two brothers, a daddy, and my grandfather. Too many men, in other words. They diluted M'ma's influence by diverting my attention to things like the danger of answering nature's call in the dead of the night. I've got a hint for those of you raised in a less spit-and-scratch world: check before you sit, because chances are that seat is gonna be up. And they don't even have the grace to be embarrassed about it. According to my sweet baby boy, if you're the minority sex in the household, you oughtta be putting it up for them. Sigh.

Having brothers was a mixed bag. When anybody messed with me they were always quick with an offer to beat them up. That was sorta nice, although I personally believe it had more to do with the fact that guys just like to fight than with any

towering concern for my welfare. You might think that's cynical but guess who the target was if no one else was around and they were tired of fighting each other? I must've spent half my childhood locked in the bathroom, screaming, "Dad's gonna get you when he gets home." I know, I know, nobody likes a stoolie. But it was either that or have my block knocked off on a regular basis, and trust me, Daddy was the best deterrent going.

A smart woman probably would've gone away to an all-girl school or moved in with some girlfriends at the first opportunity. Me, I got married to my high school sweetie. And the tradition continues. Our only kid (who hasn't been a kid for quite some time now) is the aforementioned sweet baby boy, and except for an Irish setter we had for eleven years a long time ago, even our pets have all been male. I just try to stay afloat whenever I find myself in the deep end of the testosterone pool, and if you don't think that isn't a trial sometimes, I'm here to tell you- it can be hell.

Then again, it can also be heaven. In fact, it mostly is. But listen, don't tell my guys I 'fessed up to that, okay? Trust me, it's difficult enough already, just trying to stay one step ahead of the game.

Susan shared her personal story of real-life romance in the lovely collection, Fall in Love Like a Romance Writer.

Susan in the Media

The Book Susan Recommends Most Often – and Many More!

Susan is interviewed by The Reading Lists to talks about some of her favorite books.

Susan is featured in the Huffington Post, Smart Bitches, Trashy Books, and the Guardian UK's books blog due to a hilarious typo in an ebook version of Baby, I'm Yours! Visit her Between the Covers section to read more details.

Susan is featured in the February 2008 issue of Seattle Woman, with fellow powerhouses Jayne Ann Krentz and Julia Quinn.

Susan is interviewed and on the cover of the August 2007 issue of Orange Blossom, the Orange County RWA chapter's professional newsletter.

Susan is featured in the September 2007 Issue of RomanticTimes BOOKreviews Magazine.

You always seem to write old cars into your books. What's up with that?

Ahem. I prefer to call them classic cars. My first car was a 1936 Chev that my brother found in his girlfriend's grandfather's barn. He drove it until he went away to college and needed something less high maintenance. Then he gave it to my other brother. My second brother in turn gave it to me when he, too, wanted a car that didn't need its brakes bled every other week. And that started my love affair. The Soul Mate had a '57 Chevy wagon when we got married and later we bought his grandmother's '50 Chevy. (Hmm, seems we had a theme going there)

I simply like cars that were built back in the days when chassis were still made of steel. I love their sturdiness and their big fenders and wide bench seats and all their chrome. And I guess I just incorporate old...er, classic ...cars into my stories without even thinking about it.

Will Jared and P.J. ever get their own story ?

I have been inundated with emails wanting to know the answer to this one! So lemme just tell you right off the bat that I have two connected books about Las Vegas showgirls currently in the works.

But then, my pretties, yes indeed, I plan to age Jared and P.J. 15 years and write their story. You want to know the funny thing? P.J. was supposed to be a very minor character. But that little girl simply grabbed hold of my imagination and refused to let loose until I wrote her a larger part. In fact, a story for her and Jared started forming in the back of my brain before I was even finished with Hot & Bothered! As a reader myself, though,  I find it difficult to buy a character aging that much in a single year. So I’m going ahead with my duo of  dancer books first. Then look out, world!

Because Jared and the Peeg are comin’ back.

Why did you leave us hanging with Jaz and Terry's story? Will they ever get their own book?

I wrote Obsessed back in the early 90s, and I have probably had more inquiries into Jaz and Terry's story than any other. Unfortunately, I was still a rookie then, and I simply could not figure a way around the first cousins issue. A secret adoption seemed too cliché for words. It wasn't until after the book was published that I finally realized what would have worked. Aw, man, I coulda, woulda, shoulda created an open adoption. I could have set it up so Jaz was adopted by Mack and Babe, but not secretly, since that never would have flown, given the inherently mouthy nature of the Pennington/Merrick clan. Her conflict could have been emotions that felt incestuous and her resolution the way she learned to overcome them and realize Terry was everything she'd ever looked for. Then in the end they could have lived happily ever after.

That would have worked, right? Of course, by the time it occurred to me it was about four years too late. (I am not one of those people who think well on the fly) And the set-up had to have been in Obsessed for it to work in a future book. All of which is a long way of saying Jaz and Terry will probably never get their own story.

If it's any consolation, though, I did learn my lesson. Since that book, I've been very careful to always find a way to make my secondary relationships work out.

Do you have a critique group?

Caroline Cross writes kick-ass Silhouette Desire books, and she and I met at an RWA meeting in 1993. We hit it off, but we live a fair distance apart, so we didn't actually see much of each other except at the occasional monthly meeting. Then her book, RAFFERTY'S ANGEL, came out in 1994, and folks, I gotta tell you, it just knocked my socks off. I called her up to tell her so, and we began to talk on the phone quite regularly after that about the usual writer-chick stuff: Point-of-view, life, characterization, men, transition, kids, good books/bad books, sex, and of course, plot problems.

One thing led to another, and before you knew it, we were brainstorming specific ways to get out of trouble when one of us hit the wall. Then we started to brainstorm each other's book proposals. When I was attempting to develop Baby, I'm Yours into a viable product, I ran my synopsis by Caroline and she said, "Honey, Sweetie, Sugarcakes, that plot line is chock full of holes." Well, dang, that wasn't what I wanted to hear. But did she just shoot me down and leave me bleeding in the streets? Huh-uh, no ma'am. She suggested ways to plug those holes up. Creative ways. And so it's been ever since. I help her; she helps me. Writing is strictly a one-woman show, but the plot ideas behind it are shared ones. And now we have a new plan. We're gonna die within days of each other. That way we don't have to go back to the bad old days of struggling to figure out everything all alone.

You always have those cartoon covers. How did that come about, and who does them?

Avon has an art department that's wonderfully innovative, and it was my good fortune to be one of the first authors to have a book featuring the then-unique cartoon cover. The only other of its type that I recall seeing before Baby, I'm Yours came out was Rachel's Gibson's Simply Irrisitable. Of course, this is my memory we're relying on, so I could be all wrong. But what I do know is that my Avon books have been blessed not only by their art department's vision but by the cut paper artistry of Tsukushi Kainuma. I think Ms. Kainuma is just enormously talented. And check out my Zebra romantic suspense re-releases, too. They've given them an entirely fresh new look.