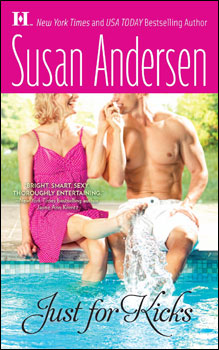 A man with a plan.
A woman uninterested in living the dream.
A teenager afraid to trust.
And a fan who takes his admiration for a dancer too far.

Connected! You met Carly Jacobsen and Wolfgang Jones in Skintight. Now they get their own book.

Two showgirls. Just for Kicks is the second one’s story.

SEE THE FORMER COVER: The original book cover from when Just for Kicks was first released in August 2006.

Sometimes, when the stars all align, one of my characters will turn out to have a personality just begging to do a complete one-eighty. Gratitude will flood my heart, because it’s not as if that best of all possible scenarios just presents itself to me on demand.

Carly Jacobsen has pretty much come to terms with her demons. Her mother never approved of her, but she filled the emotional void with her friends, her rescued animals, and dance. Not so Wolfgang Jones. He doesn’t believe in emotional voids. As a teenager he came up with a plan to make his life all that it wasn’t, and bless his heart he’s still pursuing it with single-minded determination. He sees no need for friends. And happiness? Well, he’ll be happy once he’s accomplished his mission.

You can see what’s coming, right? Because the guy who’s so sure that human connections are a big fat waste of time has moved next door to a big-hearted showgirl and he’s about to have his angry teenage nephew dropped on his doorstep. And so the fun begins.

May you laugh, may you cry, may you wet your–hmm. Perhaps not the exact combination I’m searching for here.

S’cuse me a sec. Gotta take a deep breath and shake out my hands. Okay. Let me try this again.

May you laugh, may you cry, may you fall in love with a misguided man’s evolution. As you can undoubtedly tell, I did.

Man, I love this job!

“I don’t know what to do about him,” Carly Jacobsen complained to her friend Michelle as they paused to accommodate a group of Japanese tourists wanting their pictures taken with real live Las Vegas showgirls. “He’s stubborn, opinionated, and just won’t listen.”

“A typical male, in other words.”

She muffled a snort. “Yeah.” Her feet were killing her, but she smiled prettily for the camera and tried not to feel like an Amazon as she towered above the tourists. Thank God she and Michelle were wearing the silky brunette Twenties-era flapper-style wigs from the final act instead of the towering headpieces from an earlier number. That made them only a foot taller than everyone.

“Look at it this way,” Michelle murmured over the shutterbugs’ heads. “At least you can be grateful he’s got four legs instead of two like the guy I live with.”

“There is that,” she agreed. “Rufus has been one tough pup to train, but at least I have some eventual hope he is trainable.”

“Which is more than you can say for most men.”

“Right.” Carly had never had any interest in living with a man. And yet . . . “On the other hand, you get regular sex. I only have the dimmest memory of what that was like.”

They struck a couple more poses before easing away from the tourists, who bowed, smiled and murmured their thanks. Carly flashed them a genuine smile in return. She really liked the Japanese. They were polite, and that was very much appreciated because she didn’t see lovely manners every day in her business. Especially among the male half of the population.

“You wanna stop for a drink?” Michelle asked as they crossed the casino a moment later.

Leaving Michelle at the little lounge they often frequented, she headed toward the dressing room to change into her street clothes before going home. She’d been dancing in la Stravaganza , the big production show at the Italian-themed Avventurato Resort Hotel and Casino, for so long now that she rarely heard the sounds of the casino around her any longer. But she was particularly tired tonight after spending the early morning hours wrestling with the dilemma of Rufus. He was the newest of her babies, as she called her rescued pets, and fretting over how she was going to get him past his recalcitrant behavior had made it all but impossible to fall asleep. He simply refused to be trained. And thanks to her new neighbor, she was very much afraid that the clock was ticking on the mutt’s fate.

So now every clang and clatter of the electronic slots, every rattle of the balls in the roulette wheels and triumphant yell or commiserating groan of the gamblers crowding the casino floor kept time with the headache beginning to throb behind her left eye. Which perhaps explained why, when a petite white haired lady clutching a bucketful of silver dollars slammed into her with an oversized handbag, Carly, who was generally sure-footed as a mountain goat, staggered backward.

A little clumsiness would have been the end of it, except she’d just climbed the two stairs that divided the high-stakes slot machines from their humbler brethren. Her stumble back sent the heel of her right T-strap stepping off into space and, unbalanced, she grabbed for the railing while automatically tightening her core muscles to lift her shoulders back into alignment with her hips.

Her fingers brushed the railing but it slid through her grip. And although she straightened enough to keep from back flopping, she landed in a graceless heap on the floor, her right leg twisting beneath her.

An obscenity hissed through her teeth as pain exploded in her ankle.

There were exclamations all around and a vague sense of people crowding close. Someone bent over her. “Are you all right, Miss?”

She looked up at a man with light brown hair, backlit by the garish lights of the hundred dollar slots at the top of the stairs. When his face swam into view, she noticed in a hazy sort of way that he was extremely handsome.

He could have been a troll for all she cared, since she could barely see through the pain clouding her vision. Besides, what she did manage to focus on was enough to tell her he lacked the edginess that usually attracted her- that certain something that turned men into what her friend Treena referred to as Got Testosterone? guys.

His face was also merely one of many. Pulling her gaze away from him, she saw that several people were gathered around gawking at her. But not, she noted, the little old lady who had knocked her on her ass.

Studying her with concerned eyes, the man who’d inquired about her well-being crouched down next to her. “Is anything broken?”

She gingerly untangled her legs until she’d freed her trapped ankle, her breath catching as the shifting weight sent a fresh shard of pain zinging around her foot. “No. At least, I don’t think so. I twisted my ankle, though.” And it hurt so damn bad it was all she could do not to whimper. She was never at her finest when injured.

A guy young enough to think multiple piercings and black eyeliner and lipstick were actually a fortunate fashion statement pulled his gaze away from the generous stretch of her legs long enough to nod. “Yeah. It’s swelling up.”

“Needs ice,” someone else agreed.

“So,” murmured a portly man in a pair of Sansabelt pants that were hitched well above his natural waistline, “Could I get my picture taken with you?”

“What is going on here?”

Carly’s blood pressure immediately spiked. Shit . She knew that last voice. It was deep and accented, and God knew she’d heard its disapproving timbre directed at her on more than one occasion these past few weeks. It belonged to Wolfgang Jones, second in command of the Avventurato’s security and surveillance department.

And her recently-moved-in, pain-in-the-ass, next-door neighbor.

Just For Kicks is available in the following formats:

→ As an Amazon Associate I earn from qualifying purchases. I also may use affiliate links elsewhere in my site.